Life Is not Easy, So What?

Letters from a Woman of Genius and Combat 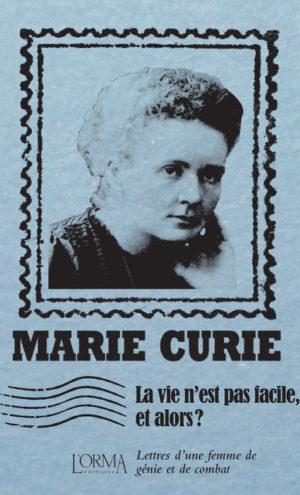 Physicist and chemist, twice Nobel Prize winner, Marie Curie is an icon of scientific progress and concord between peoples.

Despite the prejudices and obstacles she faced, the researcher was able to make a decisive impact on her era and that to come. This selection of letters gives an account of her extraordinary and exemplary destiny.

Marie Skłodowska-Curie, or simply Marie Curie, born Maria Salomea Skłodowska on November 7, 1867, in Warsaw (Russian-ruled Kingdom of Poland) and died on July 4, 1934, in Passy, in the sanatorium of Sancellemoz (Haute-Savoie), was a Polish physicist and chemist, who became a naturalized French citizen through her marriage to the physicist Pierre Curie in 1895.

Cover and layout by Elena Vozzi.