30 Ways to Kill Your Husband 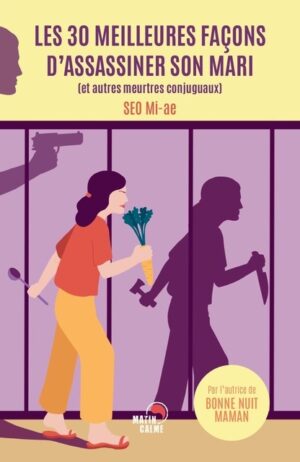 A woman goes to the police to confess the murder of her husband. The officials try to dismiss her quickly, because they are so used to her coming to "confess" to them about the murder. Indeed, she imagines so precisely—and so often—this passage to the act that she conceives a real feeling of guilt. For some time now, she has been under the care of a psychologist on this subject.
This time, however, things are different. Because, yes, the husband is really dead. But very quickly the investigation exonerates her completely and she goes home, feeling sorry for herself.
Maybe it’s time to talk to her shrink about it? Especially since they have become very, very close..

Seo Mi-ae is a Korean detective star. Like any Korean author, she starts with poems that appear in the press. Then in 1994 she published her first detective novel, which was a huge success: 30 Ways to Kill Your Husband. Her second, The Doll’s Garden, received the first prize in the Korean Polar. Since then she has published other novels and short stories and several of her books have been adapted for film or television.

Seo Mi-ae is also a screenwriter for television and film. She lives in Seoul.

Responding to the request of a Korean literary magazine, Seo Mi-ae wrote this long story in 1994. Since then, this text has been republished. It has also been adapted for the stage and has been performed for over twenty years.