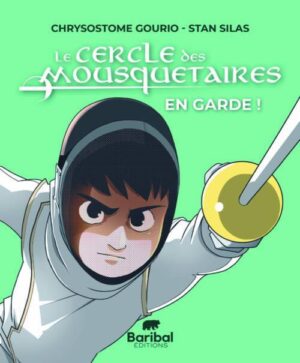 An addictive adventure novel that reconciles tradition and modernity!

Disoriented by his grandfather’s death, Paulin must welcome a newcomer to his fencing club. Her new friend will not, however, be out of place in the incredible adventure that will make them see their sport in a new light… After the death of his grandfather, Paulin has almost lost the taste for fencing. One night, however, he surprises some figures who come out of the fencing room discreetly. Could they have a link with the mission mentioned by his grandfather just before his disappearance? Accompanied by Anahita, a new student of the club who is not afraid of the cold, Paulin could uncover a major mystery… Pierre Gabarrou, the master of arms of the “Cercle des Mousquetaires”, leaves behind him a great void in the world of fencing. But wouldn’t he have been the bearer of a secret even more important than his multiple titles of champion?

Chrysostome Gourio has been a philosophy teacher, a bookseller, a French-language sign interpreter and is now the author of several detective stories and children’s novels (Rufus le fantôme, Wilma la vampire,… published by Sarbacane Editions). He also practices fencing.

Stan Silas lives in Brittany. He is an illustrator in publishing and in the children’s press, and is also the author of comic strips such as Biguden, Norman’s life or Sylvaine - Itinerary of a poor child. He has also illustrated Les Mômes de l’ASM.

Volume 1 of a series of three volumes.

Recommended by the French Fencing Federation.

A novel that presents fencing in club and competition using the spring of the adventure!