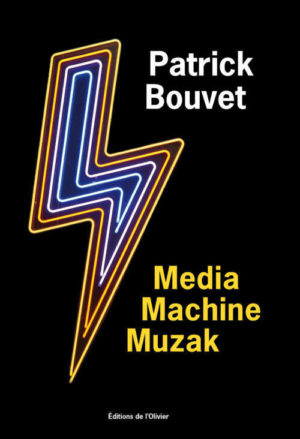 The title stands in for a program. Media Machine Musak designates the “noise of the media”, the infernal, irresistible machine that scrolls across our screens and in our minds. Marika is the first figure of this fiction-performance imagined by Patrick Bouvet. A sixties icon, a survivor of the seventies, she is waiting in a hotel. Since she is not really famous anymore, she is waiting. There is also a businessman who forgets himself under chemical substances in nightclubs saturated with disco; a model, Bruce, whose image is only a memory maintained in a kitsch palace; a racing driver in agony in his destroyed car, in front of the wide eyes of the spectators and television viewers who watch in loop the rollovers made by his car...

In this strong and exciting text, Patrick Bouvet opposes the trivial material of the “news” with a free, poetic language. The fears and impulses that move society are revealed in a permanent shift of meaning, escaping formatting. It is a hymn to freedom in the midst of this immense canvas that becomes more opaque every day.

Patrick Bouvet was born in 1962. In the 80’s, he was a singer and composer in a rock band. Since the 90s, he has extended his work on sampling and musical collage to writing. In situ, Shot, Direct, Chaos boy, Canons, Pulsion lumière, Carte son, Petite histoire du spectacle industriel, Le livre du dedans were all published by l’Olivier Editions (1999-2019). Mixing writing and performances, he is one of the most remarkable artists of the underground scene in France.